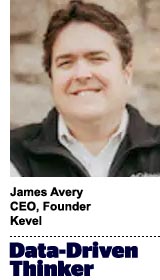 “Data-Driven Thinking” is written by members of the media community and contains fresh ideas on the digital revolution in media.

Today’s column is written by James Avery, founder and CEO at Kevel.

The digital ad industry seems faced with an existential choice – go Google’s way, and give up your destiny while bearing the consequences.

Or band together and fight.

It’s that second route that is leading to some unexpected enthusiasm. Could the beleaguered publishers of the web, often left to fight for the revenue scraps Google and Facebook don’t get, really join forces and level the playing field? Maybe even put the walled gardens on their heels a bit?

I’m sorry to be a downer – but I think we’re kidding ourselves. The idea of every publisher and ad tech company getting together and agreeing on a new unified ID – whether via LiveRamp, The Trade Desk or dozen other alternatives –is about as likely as Mark Zuckerberg and Tim Cook becoming best friends.

I’m talking of course about the impending end of the third-party cookie, big changes in how advertisers can track mobile ads (thanks to Apple) as well as regulation.

There’s no doubt that digital advertising is staring down a fundamental shift/threat to its business model. This industry has largely built on its precise targeting power, and that power may be set to disappear. Just look at the recent layoffs and restructuring over at Criteo, a company built on retargeting.

It’s certainly understandable to find any way possible to hold onto this deterministic potency. It’s scary to imagine going back to a time when publishers would have to sell ads by using content as a proxy (men visit sports sites, right) or by using audience surveys and the like –especially as titans like Google, Facebook, and Amazon will keep their logged-in user advantages post cookie.

It’s also understandable that the ad industry is wary of the cookie-replacement solution that Google is spearheading –because funnily enough, Google tends to do things that favor Google (like any company would).

So let’s instead take our hard-earned user data like subscriber info, email addresses and/or wireless numbers, pool it all together and come up with a new consistent way to identify web users –then let the ad targeting begin!

All we’ve heard as of late is how every brand and publisher wants to be a direct-to-consumer brand. Not only do these companies want data on their customers in order to market to them, but they also want the trust and long-term relationship this promises.

Now they’ll all of a sudden start sharing this info? The New York Times and Dollar Shave Club and Hubble Contacts are all going to work together so that tons of smaller brands and blogs and whomever can benefit? I don’t see this as likely.

I don’t care how many encryption and non-PII steps this process promises –this is not going to happen. It’s not in these companies’ long-term interests.

To be sure, there are some signs of big players coming on board. For instance, The Washington Post has committed while exchanges such as Magnite and OpenX have endorsed the project. You can make a case that advertisers –theoretically –would like to be able to continue to target specific audiences online –especially on brand-safe properties.

However, think about the history here. The airlines have been trying to create a unified way of booking flights, called NDC, for the better part of a decade. How much time did the cable TV world try to create a common ad platform in Canoe before giving up?

Closer to home, how many premium, brand-safe ad sales consortiums have we seen, only to get very little traction (and barely get noticed by the duopoly). From QuadrantONE to Pangea to Brand.net to ShortTail Media to TrustX – inevitably, individual publishers always prioritize their own business and struggle to enact change. Even ads.txt, a seemingly non-competitive effort aimed at stamping out ad fraud, has struggled to get mass adoption.

To be sure, the stakes are a lot higher this time around – if your entire business feels suddenly vulnerable, you may be a lot more inclined to prioritize a consortium.

Still, I know this sounds negative, but I think we’re better off. Instead, it’s time to let more walled gardens bloom.

We think building a custom ad platform can be a win for publishers and brands because they’ll have more options and better control of their own revenue destinies. Adopting a new independent standard – with Google or otherwise – is liable to change again in the future, and we’ll be having this same debate again.

The reason we are in this spot  is because so many of us relied on Google and cookies. Publishers who can pivot strongly to direct-sold ads and proprietary data will be much less impacted by arbitrary changes driven by tech giants or lawmakers.

It won’t work for everyone, and maybe won’t be a fair fight, but this is a competitive business. The publishers with high-revenue, successful ad platforms will have more money to grow than ones that don’t.

Better to win on your own merits than end up riding someone else’s wave and hoping you don’t crash.