There Is A Right Way And Wrong Way To Do A Drag Radial Burnout. Watch! 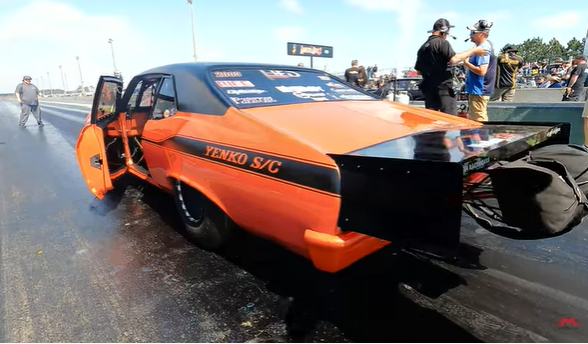 Tire smoke rules. It does. It is one of the worlds 5 great smells as well, but that’s another blog item. With that said, smoking the tires in a burnout is not just about making the most smoke possible. Or at least it isn’t the way to do it for maximum performance going down the race track. It might be the most fun however, so keep that in mind. But the right burnout depends on a couple of things. Those things include the type of tire you are running, the prep that has been done to the track you are racing on, and the configuration of the car you are racing. The third one has a lot of variables are aren’t as important in this context as we’ll assume your car has real power and a trans brake.

The other two matter, and to tell us about how they matter, here’s a guy who knows a ton about Drag Radials, and drag racing tires in general, another guy who knows a ton about traction compound, and track prep in general, and another guy that knows about going down a prepped race track on a fairly small tire who also happens to think burnouts are the best part about drag racing. We’re talking about Tommy Kundrik at Mickey Thompson, Jason Rueckert at VP, and Justin Martin respectively.

Listen to these guys and you’ll learn something.

Ridetech Is Doing A Complete OBS Chevy Truck Suspension Install LIVE At The Goodguys Show This Weekend In Texas!