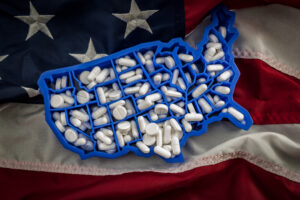 Opioid use and the lack of treatment continues to be a concern for Medicare beneficiaries, with about 50,400 Part D beneficiaries experiencing an opioid overdose in 2021, a new report shows.

The overdoses recorded in the report are from prescription opioids, illicit opioids or both. While OIG found nearly 50,400 Part D beneficiaries who experienced an overdose in 2021, it said the number is likely to be even higher as some may have overdosed and not received medical care that was billed to Medicare. Another possibility is that their claims have not been submitted to Medicare yet.

The high number of overdoses could be due to a lack of support. More than 1 million Medicare beneficiaries had a diagnosis for opioid use disorder in 2021. But despite this high number, only 18% received medication to treat their disorder. However, this is still an increase from 2020, which was at 16%.

There are three medications to treat opioid use disorder that are approved by the Food and Drug Administration: buprenorphine, methadone and naltrexone. While buprenorphine and naltrexone are both covered by Part D, methadone is not because it is not dispensed at a pharmacy for the use of opioid disorder treatment. It can only be administered or dispensed at opioid treatment programs.

There were some positive trends found in the report mainly in the number of opioids being prescribed. The number of Medicare Part D beneficiaries who received at least one prescription opioid in 2021 fell to about a quarter of beneficiaries, a decrease from prior years, according to OIG. In 2016, this number was 33%.

Although there were some positive insights, OIG still is calling for action on the opioid crisis in the U.S.

“There is clearly still cause for concern and vigilance, even as some positive trends emerge. Monitoring opioid use and access to medications for the treatment of opioid use disorder as well as to naloxone are critical to addressing the opioid crisis,” OIG said in the report.