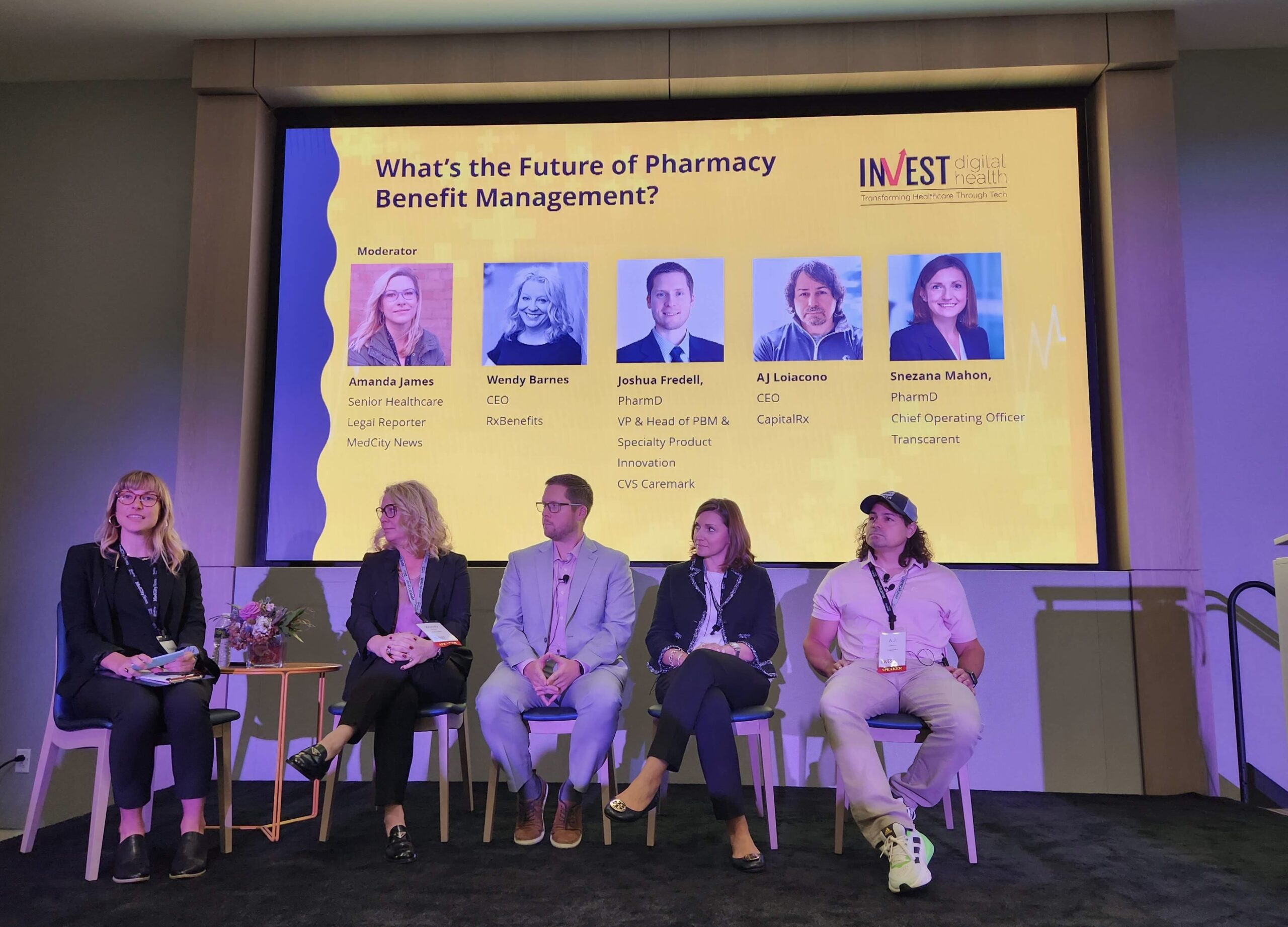 The Big Three – CVS Health, Cigna and UnitedHealth Group – account for 80% of the total adjusted claims in 2021 for prescription drug benefits through their pharmacy benefit management businesses. Two of them also own an insurance company while CVS Health owns both an insurance company and a retail pharmacy.

In June, the Federal Trade Commission announced that it is scrutinizing what many people believe are unfair business practices of PBMs that stand between drugmakers and consumers and drive up drug prices. FTC’s probe includes the Big Three — CVS Caremark, Cigna ExpressScripts and United’s Optum — as well Humana, Prime Therapeutics and MedImpact Healthcare Systems, the country’s largest independent pharmacy.

Meanwhile to give these Goliath(s) a run for their money, a whole host of upstart David(s) have sprung up offering to be more transparent than the established PBMs. So, when MedCity News’ INVEST Digital Health conference brought together the biggest of the Big 3 and smaller startups last week in Dallas to discuss the future of PBMs, it seemed appropriate to ask the most obvious question: Should the same entity be allowed to own a retail pharmacy, an insurance company and a pharmacy benefit management subsidiary? That’s the question that moderator Amanda James, senior healthcare legal reporter, MedCity News, asked members of the panel.

“You’re expecting a ‘no’ “shot back Fredell from CVS Caremark to audience laughter. “I’ll go first since that hits on our model.” [more laughter from audience.]

Fredell, a former pharmacist went on to add:

I think the important part we see is there needs to be better integration across the system and how you bring these units together. Have we done it perfectly? No, but it gives us an opportunity to do that and we wanna leverage that for better patient experience, better cost management. And, and I think that’s what we ask our clients to hold us to. It’s like, are we doing a good enough job at managing costs, managing care in an integrated model that does bring those assets together.

Barnes, also a pharmacist, and the head of an upstart benefits company tried to hew to a middle line – not saying “no” to the question of a single entity owning a pharmacy, PBM and an insurance company – but exposing the flaws nonetheless.

I think conceivably the notion of having all of the points connected, right —  your inpatient, your outpatient, your pharmacy, your medical — that makes sense. We all know holistically that you want to see the whole picture to best manage outcomes. Where the model has gotten tripped up is that the incentives are no longer aligned for the client. And so unfortunately, if you’re the client who is all in with all of those services, you’re not quite sure what value you’re getting in each portion of it. And god forbid, if you decide to extricate yourself from, let’s use specialty pharmacy as an example, then suddenly you have financial penalties … for services that you’re no longer buying from an integrated model. You’re now paying a penalty for things you’re not getting that you’re now purchasing outside that collective. And that to me is where the model breaks down a bit. But conceivably the idea of keeping it together, it makes sense on paper. It’s just an execution issue.

By contrast, Loiacono, the software developer CEO of Capital Rx, took a no holds barred approach. With a deadpan facial expression, he launched a blistering attack of the current system accusing “vertically integrated entities” of unfair practices. [Both Barnes and Mahon  began to nod their heads in agreement as he spoke at length]

I think this is a world of rainbows and sunshine you’re describing. And you know, what I see is, unfortunately, abuse of power….  So what happens is, in the free market we should have, my company will compete for pharmacy benefits and will win and will be awarded the business. And then a medical carrier, oftentimes the vertically integrated entity that lost the business because they couldn’t provide a competitive price or service  suddenly says, ‘I shall not share data, I’m gonna block you.’

… So what they want to do is continue to put up walls, artificial barriers that has nothing to deliver better care. And so I find this behavior reprehensible.

… So the promise, the vertical integration and the rainbow and sunshine that people are talking about is great, but let’s get back to what we need, which is access to the payer data and no anti-competitive behavior. That’s my position.

Without being quite as in your face, Mahon with Transcarent, also a former pharmacist, advocated for wholesale change.

I would just add from a consumer standpoint, the system has to be completely gutted and redesigned….They’re ultimately the payers of the care and they’re suffering, they’re lost. The healthcare system today has gotten more complex, more confusing, and not affordable at all. And so when you think about that consumer experience, transparency has to be front and center…. And so what we’re trying to do at Transcarent is very similar to what AJ was describing, sort of bringing that transparency to the consumer.

But we’re doing it across the board, across the medical and the behavioral and the pharmacy benefit because you can’t just have pharmacy in one end of the equation. You need the data to actually connect all the elements to deliver this comprehensive care.

It’s not immediately clear when FTC’s probe into PBM practices will wrap up but in its announcement, the agency outlined that it would specifically look at the following:

One group that immediately cheered the announcement from the FTC was the National Community Pharmacists Association.

“PBMs behave like monopolies. Their secretive, anticompetitive practices increase prescription drug prices, limit consumer choice, and stymie competition,” charged CEO B. Douglas Hoey in a statement. “They’ve escaped serious scrutiny for far too long, but this study will bring their dirty laundry out into the open.”

All eyes will be on the FTC now, and CVS Caremark is ready to defend itself when James asked how it is preparing for the upcoming probe.

“I‘m not involved in that so I couldn’t speak to how we’re preparing for that, but I’m sure we are very well prepared and I expect that’s part of the overall kind of market investigation of a whole space,” Fredell said.