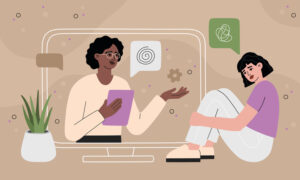 The survey was published Thursday by advocacy group America’s Health Insurance Plans (AHIP). It was fielded in October by NORC at the University of Chicago and included a nationally representative sample of 1,000 adults, of which 498 were commercially insured.

AHIP’s survey found that 73% of commercially-insured telehealth users think that “Congress should make permanent the provisions that allowed for coverage of telehealth services before paying their full deductible.”

Because of these findings, “health insurance providers encourage policymakers at the federal and state levels to make telehealth design flexibilities permanent to allow for the continued convenience, access, and value they provide for Americans,” the advocacy organization stated in a news release.

“Patients and providers accept — and often prefer — digital technologies as an essential part of healthcare delivery,” Jeanette Thornton, executive vice president of policy and strategy at AHIP, said in the news release. “Telehealth can be just as effective as in-person care for many conditions and allows patients to receive more services ‘where they are.’ That’s why health insurance providers are committed to strengthening and improving both access and use for the millions of Americans who use telehealth for their health care needs.”