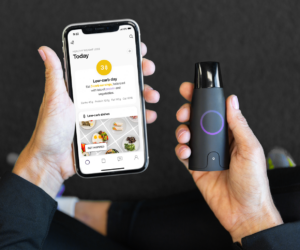 Users breathe into the Lumen device in order to get a reading on their metabolism. Based on the results, the connected app will give users a recommendation to follow a low-carb diet that day, a high-carb diet or somewhere in-between.

Wellness and fitness company Lumen announced Thursday that it aims to bring its metabolism tracking platform to more consumers in the U.S. and globally after raking in $62 million in Series B funding.

The Tel Aviv, Israel-based startup was founded in 2014 by twin sisters Michal and Merav Mor when they were training for the Ironman, a triathlon consisting of swimming, biking and running. They created a peer-reviewed handheld device that measures users’ metabolism through breath and connects to an app that helps track goals and provides nutrition coaching. The product is sold directly to consumers through the company’s website.

“Lumen understands the impact of each person’s nutrition, exercise, sleep, and stress on their metabolism by simply breathing into the device,” Michal Mor, co-founder and head of science for product for Lumen, wrote in an email. “Up until now, this was a process that was only available in hospitals or clinics and consisted of a 45-minute lab test.”

Users breath into the device each morning, which measures CO2 to determine the body’s source for energy that day: fats or carbs. It gives a score from one to five, with one meaning the user is almost entirely burning fat and five meaning the user is almost entirely burning carbs. Lumen will then give a recommendation for the user’s food intake, which could be a low-carb day, a high-carb day or somewhere in between.

The $62 million funding round was led by Pitango Venture Capital, and included participation from Hanwha Group and Resolute Ventures. In total, the wellness company has raised $77 million.

With the financing, Lumen hopes to reach more consumers, expand its personalized nutrition and lifestyle coaching services and gain more research partnerships with academic institutions. In the past year, the company has conducted several studies with universities, including Purdue University’s Whistler Center for Carbohydrate Research, University of Toronto’s Faculty of Kinesiology and Physical Education and ARU Cambridge, Mor said.

There’s a need for the company’s services. The metabolic health crisis is responsible for $464 billion in annual healthcare costs and affects eight out of 10 American adults, according to ScienceDaily.

“Our goal has always been to make metabolism measurement accessible to global communities because it’s the starting point to unlock your health and prevent major illnesses,” Mor said. “Lumen’s tracker helps users to improve their metabolic health, by optimizing nutrition, sleep, fitness regimes and more. Taking specific health conditions into account, like menopause and diabetes, helps us target our prime metabolic health.”

Lumen is the only company measuring metabolism through breath with a handheld device, Mor declared. However, for people diagnosed with a metabolic disease like diabetes, companies such as Dexcom, Medtronic and Abbott offer continuous glucose monitoring devices available by prescription.