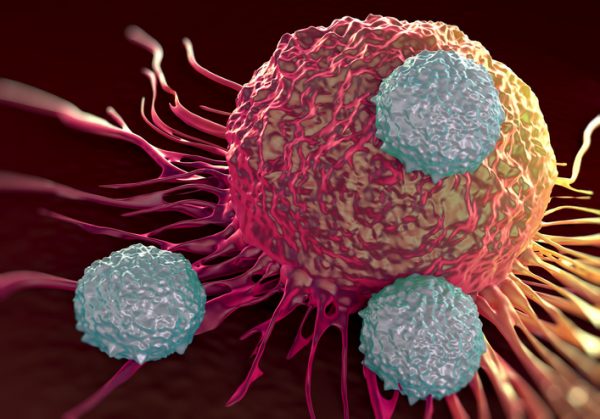 For some cases of cancer, the starting point of a new treatment is already inside the patient. Cell therapy provides another option for advanced blood cancers that have not responded to other drugs. But turning a patient’s immune cells into targeted tumor fighters happens in a complex process that takes time and adds to the overall cost of therapies that now rank among the most expensive cancer medicines available.

Various players in the biopharmaceutical industry are developing ways to make cell therapy manufacturing faster and more efficient. In some cases, R&D efforts aim to supplant the current manufacturing process altogether. But these experimental approaches could be years away from reaching the market. As more health systems around the country begin to offer cell therapies, these sites must grapple with the challenges presented by current manufacturing technologies.

The first cell therapies won FDA approvals in 2017. Novartis’s Kymriah and Gilead Sciences’ Yescarta, both from a class of medicines called CAR T-therapies, treat severe cases of blood cancer. More recently, Bristol Myers Squibb has won approvals for its CAR T-drugs, Breyanzi and Abecma. All of these therapies are made by harvesting a patient’s T cells and transporting them to a lab, where they are engineered to express a chimeric antigen receptor–the “CAR” in CAR T-therapy. This receptor binds to a target on the surface of cancerous cells. The engineered cells are then multiplied before being sent back to the hospital, where they are infused into the patient. The manual, multi-step process of making CAR T-therapy can take weeks, while their benefit to patients is measured in months.

The span between collecting the cells and infusing the final product is called “vein-to-vein time.” That time can be up to a month, but many factors can lengthen it. Average actual manufacturing time of cell therapy is 15 days, according to Maria Whitman, global lead of pharma and biotech practice at the consultancy ZS Associates. But she added that the complexities of handling and transporting a biological product, combined with the remoteness of a lab or hospital, can increase the time spent in the supply chain by days, even weeks. Not all of the time elements are under a pharma company’s control. Clinicians point out that the process can’t even begin until a patient’s insurance company approves it, which can take up to two weeks.

All of these steps are for a single treatment for a single patient. In other words, the manufacturing process is not scalable. Jennifer Pancorbo, a biomanufacturing expert at North Carolina State University, said the challenge of scaling manufacturing is like taking a recipe tailored to the preferences and needs of one person and trying to make it for many.

“We are cooking just for you, with all your dietary restrictions and all the flavors that you like,” said Pancorbo, who directs the university’s Biomanufacturing Training and Education Center. “You really don’t have a way to scale that up very easily because it is very personalized.”

Robotics and miniaturization of manufacturing components will mean that the process won’t require a full-sized lab and the capital expense and staffing costs that these facilities contribute to the ultimate price of the therapy, according to Pancorbo. In time, she said, mini cell therapy factories could be set up in a local hospital or a small clinic, making these therapies more widely accessible, following a template being pursued for Covid-19 vaccines: bringing manufacturing to places where the products will be administered.

Some startups are developing technologies that could make cell therapy manufacturing more widely distributed. The experimental system of London-based Ori Biotech uses robotics and automation to replace human labor. The company’s technology also employs data analysis to assess the health of cells throughout the manufacturing process. That capability will show what’s working or not working, enabling lab workers to link cause and effect, said CEO Jason Foster. A human will still need to handle quality control and quality assurance but the goal is to automate as much of the process as possible. By shaving logistics time and condensing and automating various steps in the process, Foster believes cell therapy manufacturing can shrink to seven days.

Ori intends for cell therapy developers to use its system at various stages: discovery work, clinical trials and commercialization. In a commercial setting, the Ori technology could be part of a distributed model that brings manufacturing closer to the patient. Foster said it doesn’t make sense to fly a patient sample to a distant lab, process it, then fly it back. “That’s never going to be a scalable process,” he said. “We have to think about other ways to do this.”

Another startup, Cellares, is developing a manufacturing system called Cell Shuttle. The entirely enclosed system, which the company describes as “a factory in a box,” houses the instruments needed to handle cells and perform the various steps of turning those cells into therapies, eliminating the variability and risk of error from humans. Software and robotics automate this process, which CEO Fabian Gerlinghaus claims will make cell therapy manufacturing scalable. The South San Francisco-based startup has tested its technology with CAR T as well as other types of cell therapy and Gerlinghaus projects Cell Shuttle could be market ready in 2024. This system, about as big as a shipping container, could work in either a centralized or distributed manufacturing model, he said. But he added that it might not be appropriate for all locations.

“While the Cell Shuttle automates most of the process and there is much less manual labor and overhead, [manufacturing] is still a regulated process,” Gerlinghaus said. “That’s not usually the core competency of a hospital in a rural area.”

Rural hospitals may have an uphill climb in providing CAR T-therapies, but the availability of these innovative treatments is growing. About 70% of the U.S. population lives within 50 miles of a hospital that administers CAR T-therapy, a significant improvement from the early days of these therapies, ZS’s Whitman said. Providers have told the firm that offering these treatments is now profitable for them. As the health sector gains more experience with cell therapy and hospitals reach better reimbursement agreements, ZS expects more sites will begin to provide these therapies.

A Hospital Gets Ready for Cell Therapy

NorthShore—Edward-Elmhurst Health, which was not involved in any cell therapy clinical trials, has spent the past year preparing to offer CAR T-therapy. The nearly 2,400-bed hospital system serves the Chicago suburbs. Dr. David Grinblatt, a hematologist overseeing NorthShore’s implementation of cell therapy, said that on the clinical side, the procedure is not much different than an autologous stem cell transplant. The hospital has three decades of experience providing those procedures, so it already has infrastructure in place for collecting and shipping cells. However, other aspects of cell therapy introduced entirely new challenges. For one, it was not immediately clear which department would be responsible for it.

“It’s not a pharmaceutical product, it’s not a blood product,” Grinblatt said. “It’s an engineered product. It doesn’t fit into the usual categories.”

Other health systems have also had similar deliberations. In one instance, 60 people from different parts of a hospital had to be brought in to figure out how it would administer the therapy and manage its side effects, said Whitman of ZS, which consulted on some of the initial cell therapy launches. That tracks with the experience at NorthShore, where Grinblatt said staff from multiple parts of the health system had to train on various aspects of providing the therapy.

“The patient will be managed in the hospital by many different individuals,” he said. “It’s multidisciplinary.”

NorthShore chose to offer Yescarta, the CAR T-therapy developed by Kite Pharma, a Gilead Sciences subsidiary. Grinblatt said NorthShore needed the company’s approval to provide the therapy. Kite officials visited the hospital, met with those who would be involved with the therapy, and performed an audit of the site’s operating procedures. NorthShore then did a dry run to allow Kite to assess how the hospital handled the engineered product. This review process, which Kite requires of all sites that offer its cell therapies, has taken up much of the past year.

Grinblatt said NorthShore is just about ready to offer Yescarta and the hospital’s first patient could receive the treatment early this year. He expects most patients who will receive this therapy will come from nearby. Patients must be at the site for 10 to 14 days to prepare for the treatment, and then up to two weeks after the infusion of the engineered cells to monitor for any toxic effects, he explained. That means patients and family members who don’t live close must plan to travel and be away from home for about a month—posing yet another challenge.

“Not everyone can afford to do that, or wants to do that,” Grinblatt said.

Allogeneic cell therapies could overcome some of the manufacturing challenges posed by a personalized cell therapy. These off-the-shelf treatments could be made from the immune cells of healthy donors. BMS is developing such therapies, which could be kept in storage until needed as a ready-to-use option.

Other allogeneic research efforts are bringing parts of the manufacturing process inside the patient. In 2021, Sanofi paid $160 million up front to acquire Tidal Therapeutics, a preclinical startup that uses nanoparticles to deliver messenger RNA that reprogram a T cell to go after tumors. In short, the cell engineering step of the manufacturing process happens in vivo rather. Sanofi hasn’t disclosed much about Tidal’s work, but John Reed, executive vice president, global head of research and development, gave a glimpse last Wednesday during the J.P. Morgan Healthcare Conference in San Francisco. He said that unlike the current generation of CAR T-therapy, Sanofi aims to make the engineered cells in the body “rather than having to go through this elaborate ex vivo genetic engineering approach” that makes the therapy complicated and expensive.

“We’ve reduced it to practice in the laboratory and [we are] trying to bring that forward into the clinic in the near future as one of these turning-science-fiction-into-science-fact sort of opportunities for us,” Reed said during a media briefing attended by MedCity News’ editor.

Startups are joining the chase for allogeneic cell therapies. The University of Pennsylvania, where Novartis’s Kymriah was initially developed, recently spun out Capstan Therapeutics. Similar to Tidal’s approach, Capstan is also using nanoparticles to deliver mRNA to cells to produce an in vivo CAR T-therapy. Meanwhile, MIT spinout Kelonia Therapeutics is developing in vivo CAR T-treatments that could address solid tumors—a capability that has eluded cell therapies so far.

Allogeneic therapies will eliminate a hospital’s need to do two-way shipping of cells, which means faster patient access to the therapy, said Sankalp Sethi, cell and gene therapy practice lead at ZS. However, these therapies are still in various stages of development and the open question is whether they will have the same durability as autologous cell therapies, he added.

Autologous cell therapies can still inform allogeneic ones, Whitman said. Hospitals are learning about manufacturing capacity, as well as how to manage variability and demand—all of which will be important for offering allogeneic therapies. In the nearer term, time savings in autologous cell therapy can be found outside of the actual manufacturing process. Apheresis, the step in which blood is withdrawn to collect T cells, can be streamlined and made more consistent, Whitman said. Another place for potential time savings is cell processing, the moving of the cells in and out of a facility.

“The opportunity is in connecting all of these pieces together, bringing with it the different pieces of the supply chain,” Whitman said.