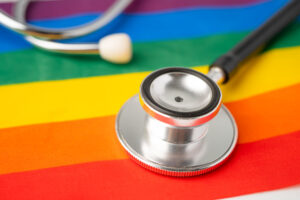 Traditionally having offered virtual care and navigation services to employers, Included Health is now moving into the health plan space. It is teaming up with Point32Health to serve its commercial members in the LGBTQ+ community, the companies announced Wednesday.

San Francisco-based Included Health gives patients access to virtual and in-person urgent care, primary care, behavioral health and specialty care. It also provides tailored navigation and advocacy services for the LGBTQ+ community and the Black community. Point32Health, meanwhile, is an organization combining Harvard Pilgrim Health Care and Tufts Health Plan, which caters to people in the Northeast. The organization serves more than 2 million members, though it’s not clear how many identify as LGBTQ+.

Point32Health will now be able offer members access to LGBTQ+ Health, Included Health’s navigation and advocacy program for LGBTQ+ members. These members will have access to a care team led by LGBTQ+ care coordinators, who can help them find in-network, gender-affirming providers. They can also be connected to support groups and receive education on medical and legal issues. The services are available through the web and an app.

“They will be greeted [by] somebody like them, somebody from the same community who has maybe lived similar life experiences or navigated many of the same healthcare challenges that members reach out to us about,” said Colin Quinn, president of communities at Included Health. “Whether it’s a parent that is looking for care for their child or looking to speak to somebody because their child just came out to them, or maybe it’s a trans member navigating their gender-affirming surgery and needs help understanding benefits and coverage.”

LGBTQ+ members often struggle to access care: 45% have difficulty finding a primary care physician, 60% struggle finding a mental health provider, 40% report having negative healthcare experiences or discrimination and 35% put off or avoid care because of negative experiences, according to Included Health research. The company is trying to move the needle on these stats, Quinn said.

“As a result of that discrimination or negative experience, members are saying, ‘I don’t know who I can trust within the healthcare system. As a result, I’m just going to postpone or avoid my care.’ That’s not a good thing,” he said.

Quinn, a gay man, has had his own struggles in accessing care. Several years ago, he tried to go on Pre-exposure Prophylaxis (PrEP), a treatment for preventing HIV.

“I was looking for a doctor to prescribe PrEP,” he said. “The first doctor I went to really didn’t fully understand what PrEP was and actually shamed me for wanting to go on it, instead of supporting me, applauding me for this good decision I was making for my own personal health … I actually postponed and avoided my own healthcare for a little bit because then I was in my own head.”

Quinn’s experience led him to founding Included Health in 2019, which was acquired by Grand Rounds and Doctor On Demand in 2021. The combined entity rebranded under the Included Health brand.

Health plans have a responsibility in improving healthcare access for the LGBTQ+ community, Quinn argued. Doing so will improve member satisfaction and reduce healthcare costs.

“There is a significant unmet need,” he stated. “Something needs to happen there. When there’s an unmet need, what deteriorates is member satisfaction, member experience … It’s actually better to ensure that members are getting connected early on to those affirming and clinically competent primary care doctors to actually drive down the long term healthcare costs over time,” he said.

Other startups providing care for the LGBTQ+ community include FOLX Health and Plume.