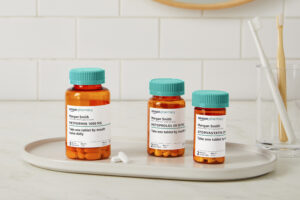 Amazon unveiled a new feature for Prime members Tuesday: RxPass, an Amazon Pharmacy benefit that gives access to generic medications for more than 80 conditions at the price of $5 a month. While it’s making headlines as it always does when the large techs make a move in the healthcare world, reactions were mixed when it came to actually affecting change on the ground.

Amazon’s RxPass is only available for Prime members. The $5 per month fee is added on to the Prime membership fee, which is $14.99 per month. The 52 drugs offered through RxPass are available without insurance and are delivered to members’ homes at no extra cost. It differs from the usual Amazon Pharmacy offering, which was launched in 2020 and serves all consumers, not just Prime members.

“If you take a closer look at what’s really being offered, it becomes clear that RxPass – in its initial form – isn’t as groundbreaking as it might initially seem,” said Marissa Moore, health tech investor at OMERS Ventures. “It’s a great first step, but there’s a lot of work left to be done.”

The news is creating a lot of hype for a couple of reasons, Moore said. The generics being offered are able to treat a broad range of common health conditions. Additionally, they’re being offered for an extremely low price.

“Through traditional retail channels, the vast majority of these ~50 generics go for more than $5/month – often multiples of that,” Moore said. “Some are several hundred dollars. But according to GoodRx data, the average retail price across the RxPass generics panel is in the ~$50 range. So on the surface, a flat fee of $5/month — regardless of how many meds one orders — is presumably very enticing to consumers, especially those who need more than one of these meds on a regular basis.”

Still, the news slightly misses the mark, Moore added. Not all of the medications are “truly meds,” she said. Some are supplements that are available over the counter, like folic acid and biotin. Some also aren’t needed on a month-to-month basis, like medications for seasonal allergies.

Daniel Grosslight, senior research analyst of healthcare technology at Citi, meanwhile described the launch as a “significant development.” However, he agreed with Moore that the new offering drives value for those needing more than one medication, in comparison to competitors like GoodRx and Mark Cuban Cost Plus Drug Company.

“It’s a pretty significant development for Amazon and in particular their pharmacy offering, which hasn’t seen a tremendous amount of traction … The prices you could get at GoodRx or Cost Plus were typically better than what you could get at Amazon Pharmacy … This is completely different,” he said in an interview. “This is a flat fee for an unlimited amount of generic drugs to treat 80 conditions, over 50 drugs available. If you’re polychronic, if you’re taking two or more drugs, it’s gonna make a whole lot of sense for you.”

By contrast, Moore argued that RxPass is not reaching enough consumers in order to have a meaningful impact on drug costs. It’s only available in 42 states, excluding Texas and California (both of which have some of the highest drug costs). Additionally, by only offering RxPass to Prime members, it’s excluding the consumers who could benefit the most: older adults.

“Those who stand to reap the most value from RxPass are those with complex chronic conditions — and those tend to be older adults,” she said. “Meanwhile, it’s these age groups where Prime penetration is lowest. If it can use RxPass to convert more of this demographic into active Prime members, that’s an additional $14.99/member/month in revenue that Amazon can earn ($19.99/member/month including RxPass).”

“Over the last decade as a practicing pulmonologist, I have seen patients with chronic diseases struggle to get access to the basic medications they need to live their lives well,” Gupta said in an email. “RxPass, a new Prime membership benefit from Amazon Pharmacy, helps address those challenges by providing patients with affordable access to generic medications that treat more than 80 common health conditions for just $5 a month.”

The news of RxPass hitting the market comes after the November launch of Amazon Clinic, an outsourced virtual care model that offers treatments for common health conditions, including allergies, acne and hair loss. Experts said Amazon Clinic will likely be more successful than Amazon Care, which shut down at the end of 2022.