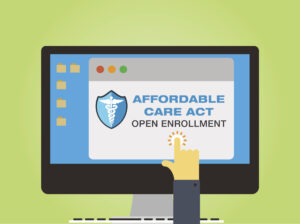 This year’s ACA Marketplace enrollment represents a 13% increase, or 1.8 million people, from last year, according to CMS. The open enrollment period began November 1 and ended January 15 for most marketplaces. This is the 10th year of ACA Open Enrollment.

“On the tenth anniversary of the ACA Marketplaces, the numbers speak for themselves: more people signed up for plans this year than ever before, and the uninsured rate is at an all-time low,” said Chiquita Brooks-LaSure, CMS Administrator, in a news release.

This year, 92% of HealthCare.gov enrollees could choose from three or more insurance companies when looking for plans. There were also new standardized plan options, which made it easier for consumers to compare plans. And due to the Inflation Reduction Act — which passed in August — four out of five HealthCare.gov enrollees could find a plan for $10 or less after tax credits, according to CMS.

“Unprecedented investments lead to unprecedented results … The Biden-Harris Administration has made lowering health care costs and expanding access to health insurance a top priority – and these record-breaking numbers show we are delivering results for the American people,” HHS Secretary Xavier Becerra said in a statement. “We will keep doing everything we can to ensure more people have the peace of mind that comes with high-quality, affordable health care.”

“Every American deserves affordable, comprehensive coverage — regardless of their income, health status, or preexisting conditions,” Eyles said in a statement. “Health insurance coverage is critical to protecting Americans’ health and financial well-being. The historic enrollment numbers today reflect the successful partnership of HHS, health insurance providers, stakeholders, and community partners to educate and enroll more Americans in Exchange coverage than ever before.”