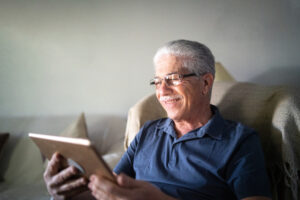 Boaz Gaon, CEO of Wisdo Health, has first-hand experience when it comes to loneliness. Before creating his company, Gaon was the primary caretaker for his father, who was diagnosed with kidney cancer, then chronic lymphocytic leukemia and eventually lung cancer.

“We felt very much alone,” he said. “We felt as if it was difficult to impossible to find people who have been in our shoes, have the capacity to be emotionally supportive and are just available. None of the solutions that were out there, primarily social networks, seemed to be able to address this need.”

This led Gaon to launch Wisdo, a social health platform that addresses loneliness and social isolation, in 2017. Through its app, Wisdo gives users an opportunity to connect with peers, trained helpers and guides. It also provides skill-building support groups led by coaches. When a user needs additional help, the company can refer them to outside clinical services.

The study included 1,374 Humana members. To be eligible for the study, participants had to be between the ages of 65 and 80, living with at least one chronic condition and had at least one emergency room visit or inpatient admission in the previous year. They also had to screen positive for loneliness using the UCLA-3, a measure for three dimensions of loneliness: relational connectedness, social connectedness and self-perceived isolation. Prior to joining Wisdo, 43% of the participants screened as lonely and 57% screened as severely lonely.

“We were really surprised to witness up close the depths of loneliness,” Gaon said.

The study found that at one month, participants had an average decrease of 6.5 days in the number of mentally and physically unhealthy days they experienced in the prior 30 days. An analysis of claims data also showed some positive results. There was a 10% decrease in inpatient visits, a 4% reduction in ER visits and 6% reduction in urgent care visits.

Additionally, 92% of participants said they would recommend Wisdo to others. About 42% of users accessed Wisdo even a year after joining the program. Participants had seven monthly visits to the app on average.

“Wisdo first helped me find support, then helped me learn new social skills that made all the difference,” one user said.

The level of engagement that members had with Wisdo’s app “pleasantly surprised” Jennifer Spear, associate director of population health at Humana.

“Traditionally, there’s this assumption that our Medicare Advantage members don’t want to engage digitally,” Spear stated. “They don’t want to do these purely online programs. For those members who engaged, they really engaged … There’s one member who had her Wisdo calendar and she was going to her groups and planned her weeks around that.”

“What we really saw during the pandemic, in the early days of Covid, was this extra attention and extra need,” she said. “Our Medicare Advantage members were lonely and this was really becoming a problem. They were stuck in their houses.”

After achieving these results, Wisdo is looking for additional health plans to work with in order to further test its product, Gaon said.

“Hopefully, as we launch new relationships, we will be able to work with new populations and learn more about how we can help specific people in specific conditions and circumstances,” he stated.

Other digital health companies that address loneliness are Papa and Pyx Health.